What a great conference we had! It ROCKED! 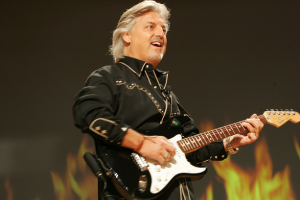 Robin Creasman, known as The RockStar Speaker, is an award-winning television producer, author, and entertainment marketing expert who speaks to business leaders, salespeople, entrepreneurs and professionals on how to be a Rock Star in their personal & professional life so they can get more business, make more money, and be more successful! However, do not worry, no one needs to know how to sing, play guitar or heaven forbid fit into leather pants to be a Rock Star!

Anyone can be a Rock Star Leader right where they are if they apply Robin’s rock star principles to their business model. It’s all about implementing buzz-worthy branding, smart marketing & great communication skills into their career plan so they can stand out from the competition and be perceived as the “go to source” for whatever product or service they provide. Robin believes that being a Rock Star Leader is your backstage pass to success!

Robin has over 25 years in the music, television, entertainment, & speaking industry, and is the author of the audio CD, Be a Rock Star! 25 Ways To Stand Out in Leadership, Customer Service, & Sales.

Lt. Colonel Kevin Sweeney is a nationally recognized speaker and author who uniquely addresses the pressures we face daily and transforms these obstacles into confidence and ultimately a formula for success.

He held the rank of Lt. Colonel in the United States Air Force and is a renowned command pilot having flown combat missions in both Viet Nam and Desert Storm during his 23 year military career. On one of those combat sorties he led his team to safety on a remarkable mission when the two engines on his left wing were completely ripped off his KC-135 (Boeing 707 Air Refueling Tanker) four engine jet airplane.

This phenomenal flight occurred during a night combat mission and as a result of the successful recovery of the aircraft, he and his team were awarded the United States Air Force Distinguished Flying Cross. The Colonel has also been a successful executive for a Fortune 50 company where he consistently led highly lucrative teams in both sales and operations over a two decade career.

The Colonel is well educated with two bachelors degrees and a Masters degree, and as an undergraduate was an all conference, all district collegiate athlete. The Colonel enchants an audience with his experience, empowers them with knowledge and sets them on the path to success.